Jungle Gorilla is a new addition to the Pragmatic Play's game family. When we say 'new,' we mean that the slot is still hot off the press. 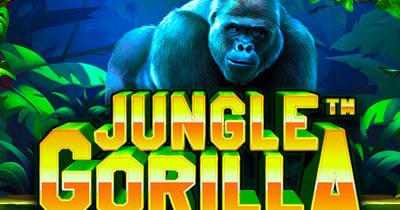 In this Jungle Gorilla Slot Review, we explore the game’s features and win potential to give you a great idea of what to expect. We also have suggestions about where to play Jungle Gorilla. So, buckle up, and we’ll start!

Jungle Gorilla will be offered across online casinos in Canada that have partnered up with Pragmatic Play. There are plenty such casinos to choose from, most of which will even reward you with a cool bonus on deposit. Check out the ones below to get the best out of your experience:

It’s not hard to learn how to play Jungle Gorilla. It’s a simple five-reel video slot and includes 20 paylines, with a 500x bet size cap on a line win.

The game has high- and low-paying symbols, a Wild, and a Scatter. The winning combinations count from left to right and are multiplied by ‘bet per line.’ When you have a winning combination on several paylines, all the wins add up.

The Scatter has no monetary value. The card symbols pay the lowest, J being on the bottom of the list, and A being on the top. The highest-paying animal symbol is the Gorilla, and the Wild is the most valuable symbol in the game.

The game has thorough autoplay settings. It lets you set the cash increase or decrease. You can also toggle the button to stop the autoplay when a feature hits or the game lands a win.

The Jungle Gorilla RTP is 96.57%, and the volatility is quite high. This setting pushes the gameplay to the risky side. It takes quite a few spins to receive rewards. However, when you hit the mark, the wins can get quite steep.

Jungle Gorilla doesn’t have a progressive jackpot feature. However, the game advertises winnings that reach up to a whopping 2,800 times the bet. This massive multiplication becomes possible due to the reel multipliers.

Jungle Gorilla’s base game is quite simple: there’s nothing revolutionary about it. It’s an uncomplicated 5-reel game, where the Wild substitutes for all the symbols except the Scatter, and the Scatter is the sole source of the game’s only feature.

It’s worth noting that several Scatters can appear after a spin, each influencing its reel counter. It’s also possible for Scatters and Wilds to land at the same time.

If you decide to change your bet amount mid-game, the reel multipliers will reset. Take this into account, and make sure you don’t lose a sweet 5x just by changing a wager amount.

Wilds, Respins and other features

The Wilds can land on all the reels. Five simultaneous Wilds on a payline results in winnings of 25x of the initial bet.

Wilds in Jungle Gorilla slot are as straightforward as they can get. First of all, they substitute other symbols in the game resulting in a winning combo. Second, they increase the reel multiplier, making the line win larger by up to five times.

The design of the game is reminiscent of all the typical Dwayne ‘The Rock’ Johnson movies. It takes place (surprise!) in a jungle. The backdrop and the ambient music create a cinematic jungle atmosphere like in 2008’s ‘Journey 2: The Mysterious Island.’

You feel like you’re somewhere in Amazonia, bound to find a hidden Mayan temple or an old city. As you walk around, you stumble upon the stone sculptures of the card symbols: A, K, Q, and J. They look human-made, but the jungle has left its mark. Of course, someone hid a treasure nearby!

Other slots to try if you like Jungle Gorilla

If you’re game when it comes to adventure slots that happen in a jungle, you’re in luck. The jungle-themed slots market is quite saturated.

No wonder we mentioned ‘The Rock’ in our Jungle Gorilla review! While you’re waiting till the next instalment of the Jumanji movie, try out NetEnt’s Jumanji slot. Embrace the 90s aesthetics and land some of its fun features. This five-reel, 36 payline slot is guaranteed to spin your head.

If you can’t do without apes in your daily game library, try out another jungle-themed slot featuring one of the most famous gorillas in the movie history: King Kong. NextGen Gaming’s King Kong Fury is feature-packed and gives you plenty of opportunities to get excited. Its distinctive features like Kong’s Call and the Lightning Reel call for an epic adventure!

Today, when slots are becoming more and more feature-packed, Pragmatic Play has decided to keep things extremely simple. However, they’ve still enhanced the straightforward gameplay in Jungle Gorilla with rewarding multipliers, great visuals and an energetic soundtrack that will ensure that you won’t easily get bored.