Read more about the Quick Hit slot, plus its entire slot series. This classic online slot is a popular game amongst Canadian players - below, we'll tell you why! 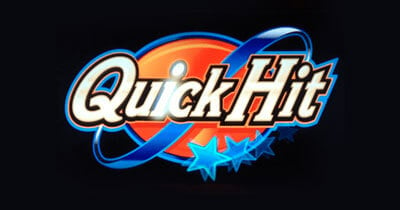 With the rise of online gaming, Bally Technologies adapted this famous slot game for the internet, eventually releasing a number of sequels, all with their distinctive features.

Bally has been in the casino business since the 1970s, building slots for land-based casinos. They have earned a solid reputation for their games being fair, fun and dependable. Throughout the years they’ve received numerous awards for their technology and innovation.

With the rise in online gaming, they’ve adopted their most popular Quick Hit slot machines to the online world, where they gained popularity straight away.

It is difficult to establish when the first Quick Hit Slot machine was released in land-based casinos, however, judging by some of the slot machines that still exist, it could have been the mid to late 90s.

The Quick Hit slots series is made up of many versions, some of which are:

They all bear simple designs that are reminiscent of the land-based casino slots. The Quick Hit slots have either the classic slots‘ 3 reels or the five-reel layout with 30 pay lines. To add further to that classic feel the slots reels are populated with the symbols Bells, Cherries, 7s and Bar.

All of the Quick Hit online slots come complete with a wild which substitutes all symbols and can act as its own symbol as well. Another symbol that all of the Quick Hit slot series have in common is the symbol of the game’s namesake the ‘Quick Hit’.

This symbol carries the biggest payout and is the symbol that can land you a progressive jackpot that is linked with this series of slots.

The Quick Hit symbol can appear anywhere without any particular pattern. The more a player lands the higher the payouts and if nine of these symbols land on the reels, he takes home the jackpot.

A characteristic that has contributed to making the Quick Hit slot machines so popular is the possibility of playing both with pennies and large amounts, attracting both low-rollers and high-rollers. The Quick Hit features and the potential to win big is a big asset as well, as players who play for pennies can also win a few thousand.

Like most online slots, the Quick Hit series of slots can be played for free using the demo versions. Players can play the Quick Hit slots online free from any online casino that sports Bally Technology slot games. The demo versions available can help you understand the games before you actually play for real money.

However, the free Quick Hit slots online, are just demo versions and any winnings cannot be cashed as they would be made up of fake money. Still, there is plenty to enjoy in the demo versions.

The Quick Hit slots were all originally released first as slot machines in land-based casinos. Their popularity and the rise of online casinos saw them adapted to the online casino world where hundreds of fans are enjoying them to this very day.

Each of the Quick Hit online slots has its own unique and distinctive features, where players have a choice about which slot to play based on its variations. But, let’s take a look together at what some of these unique features are:

Quick Hit Platinum is one of the most popular variations of the Quick Hit series. It sports the more modern set up of 3×5 reels with 30 pay lines.

This is a low to medium variance slot but with the possibility to land some pretty big wins. It can be played for as little as $0.30 or for a maximum bet of $30. The distinguishing feature of this version is the scatters. Quick Hit Platinum slot has 3 different scatters: 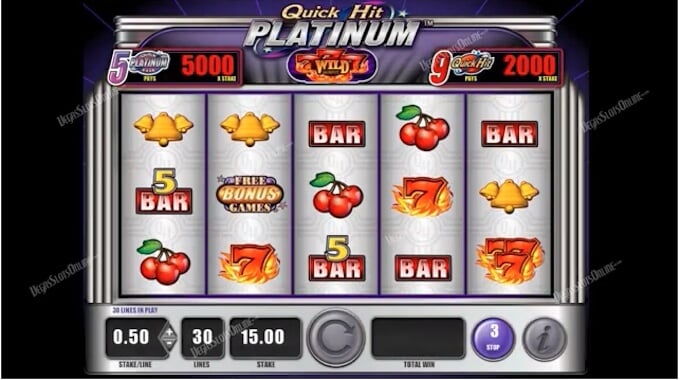 Another popular version from the Quick Hit series is the Quick Hit Black Gold slot, so-called oil is as valuable as gold and both are worth a lot of money. Just like its sister slots one will find the symbols 7s, Bars and bells.

The most special feature of this high volatility slot is the Quick Hit symbol which unlocks the scatter wins and the free spins feature.

The free spins feature will award you 10 free spins and before you start spinning for free, the reels will change into boxes with question marks and you have to choose until you find three of the same symbol, which will unlock the feature represented by that symbol to accompany the free spins. Additional features are:

Quick Hit Pro features a reel set up of 5×4 with 40 pay lines. This slot comes with a feature that is quite particular: Prochinko Free Games feature. So, called because it resembles a Prochinko machine, this feature is triggered when 3 scatters land on reels 2, 3, and 4.

Players need to collect the silver balls that appear on the board with a maximum of 20 balls that can be collected. Once they are collected, they are released, and each ball has a prize value.

Like all of the Quick Hit slot series, this particular slot has all of the basic features shared amongst the Quick Hit slots. What sets this slot apart is the Cash Wheel Bonus feature. Once triggered, the reels will change in a grid where you will have to click on boxes until you find three matching symbols which usually award free spins.

This particular slot pays homage to the one and only city of casinos: Las Vegas itself. Instead of the classic Quick Hit symbols, this version sports items we usually associate with Las Vegas like Martinis, Roulette, and the traditional slot symbols.

To accompany them on the reels are the wild symbol, the free games scatter and the Quick Hit Logo. The free game scatters will trigger free games if three or more land on the reels, with a multiplier that can pay up to x2000 your bet. To receive the free games the player will be taken to the now familiar grid where he has to select symbols from 20 boxes that will award him the free spins.

The Quick Hit slot machine series may lack the ultra-modern design of today’s video slots, however, they will remain popular for their simple gameplay, their classic design and, most of all, for the large payouts that this series of slot games is capable of handing out.

Quick Hit slots were and still are very famous at land-based casinos, and it doesn’t look like their popularity will wane anytime soon!