Established in 1981, International Game Technology, known as IGT, is one of the oldest and most well-known gaming providers in…

Most popular slots by IGT

All slots by IGT

Established in 1981, International Game Technology, known as IGT, is one of the oldest and most well-known gaming providers in the world. They established themselves when they started building casino software for land-based casinos both in the US and offshore. These days IGT produces a number of online video slots, table games, and lotteries, and over the years it’s acquired a solid reputation in the gaming world.

The History of IGT

IGT underwent a number of changes in 2015 when it was acquired by Gtech. The latter acquired the name IGT and dropped Gtech all together. Gtech used to manage many states and provincial lotteries in the US and was involved in lotteries in Europe, Australia, Latin America, Asia and the Caribbean as well.

These days IGT holds operations in more than 100 countries with its main seat of operation in London and major offices in Rome, Las Vegas, and Providence, with an employee count of over 12,000 globally.

IGT is a solid, reputable company, known not only for the quality of their games but also for taking responsible gambling very seriously. Over the course of the years, they’ve won numerous awards for their innovation, technology and games.

IGT has produced an impressive number of games over the last few years, some of which are incredibly popular with gamblers the world over. IGT slot machines are created with great attention to detail, amazing design and incredible special effects. IGT is not known to release games as frequently as other big providers like NetEnt or Microgaming, however, when they do release games, you can rest assured that they will have a lot of interesting and unique features. And speaking about games, we have to mention some of the most popular IGT slots that have been released over the years and which are still so popular today:

These are only some of the titles by IGT, as one can find quite a long list of slot games by this provider.

Where to play IGT slot games

One of IGT’s most popular slot games, Cleopatra takes you on a trip back in time to ancient Egypt. This design may appear dated when compared to newer releases, however, it does not detract from its popularity even a few years after its release. In fact, the Egyptian themed design adds a certain charm to the game. This slot of medium variance has a number of interesting features like the Cleopatra bonus feature where it is possible to win 180 free spins with an x3 multiplier. And if the wild happens to be part of a winning combination there would be an x6 multiplier. The popularity of the original Cleopatra slot has inspired many other sequels like the Cleopatra II and the Cleopatra Plus. It is also possible to play IGT free Cleopatra slots by choosing the demo mode, which allows you to play with fake money before you play with real money.

Anyone who was a child in the 80s and 90s is familiar with the popular TV series Baywatch, which is the inspiration behind the popular slot by IGT of the same name. The design of this slot bears the IGT signature style and it features the Baywatch popular characters in impressive details. This slot has a number of interesting features like two wilds, and a scatter that contributes towards the progressive jackpot that is attached to this slot game.

The design of this IGT slot is truly beautiful and full of detail and it features the story of Black Widow and her tale of crime and murder. This slot features the IGT Super Stacks feature which involves a symbol that will stack on the reels before each spin. This is quite a unique feature that IGT has added to make this slot interesting and definitely worth a try.

Free IGT slots and other games

Most of the slots and table games by IGT can be played for free in demo mode. This option allows you to play with fake money, to try out and understand the games before deciding if you want to play with real money. Of course, any winnings are also fake and cannot be claimed, but the demo version is still a fun way to play casino games. In this way, players can enjoy the IGT free Cleopatra slots and other great games by this provider.

IGT has come up with a number of progressive slot games that share a single progressive jackpot. Unlike other providers, the IGT progressives are won when a player lands the ‘MegaJackpots’ symbol across the middle line on all reels on a maximum bet. Furthermore, the whole amount of the jackpot is not paid in full immediately, instead, it is divided in 20 instalments which are paid once annually. The most popular progressive games by IGT are Cleopatra Mega Jackpot slot, Monopoly Mega Jackpot and Cluedo Mega Jackpot.

This slot is the third game in the Cleopatra series by IGT. Like the original Cleopatra slot, it has a 5-reel, 20 pay line set up with a free spins feature that acts as the gateway to the progressive jackpot. The design of the game is equally impressive with Cleopatra’s voice encouraging you to try your luck.

Everyone has played monopoly at some point or other in their lives, and we all love the game. Monopoly Mega Jackpots slot is IGT’s innovative take on this popular classic. The Monopoly slot stays true to the original board game with features reminiscent of the game like the ‘Pass Go’ feature and ‘Win Spin’ bonus.

Cluedo Mega Jackpots slot is also based on a popular board game. The game features the characters from the original game. Just like all the other progressive slots, the massive jackpot can be won both during the base game and the bonus rounds. This particular slot comes with an interesting ‘double or nothing’ feature which multiplies your base wins.

IGT may be known for its amazing slot games, but any table games player will know that they have an incredible collection of table games variants that are certainly not to be missed. Some of IGT’s most popular games are

As a reputable company that keeps up with the exigencies of the present time, IGT develops all their games in HTML5 to enable them to be played on desktop and any hand-held devices, both iOS and Android. One can find slot games, table games, bingo, and keno, all with HD-quality graphics, available from anywhere you might be. 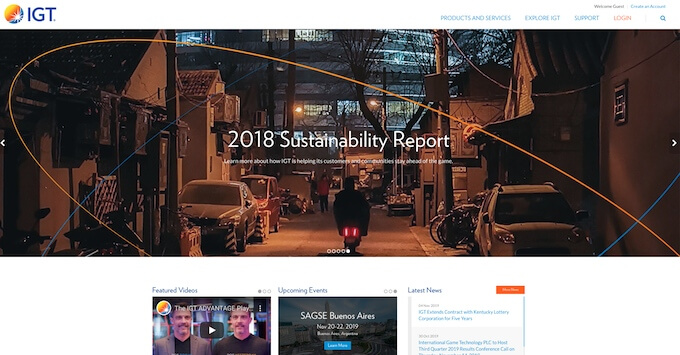 It comes as no surprise that IGT has earned such a solid reputation. We can say they don’t do anything in half measures. Their games pack amazing designs and interesting features that take gaming to a whole new level. And, what’s more, some of their games have become classics and a must-play for any serious gambler out there.