Peaky Blinders is a new branded slot with a win potential of $220,000 Featuring wilds, respins and two kinds of free… 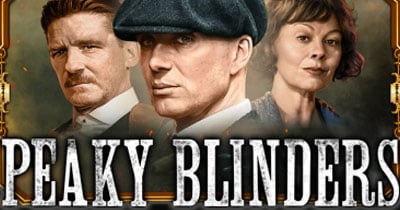 Peaky Blinders is the first branded slot from Pragmatic Play based on the popular British crime drama series by the same name. In our Peaky Blinders Slot Review, we’ll be taking a look at various aspects of the game, and also let you know where to play with a casino bonus from the UK. You’ll learn about Peaky Blinders’ RTP and whether the Peaky Blinders volatility is right for you.

If you’re a fan of the series or of slots with bonus games in general, we do suggest you give Peaky Blinders a try. The game will land across several online casinos in Canada on the 27th of August 2020. Here are some of the casinos that will be hosting this game:

The Peaky Blinders slot machine has a lot of unique and fantastic features. Even though Peaky Blinders’ RTP is little more than average, this slot offers many features that gamers are likely to enjoy.

Apart from the simple face cards, all of the symbols in this game are derived from the Peaky Blinders series.

The face cards are relatively standard, although they also incorporate appropriate design elements like bullets or razor blades.

The bonus symbol is a simple Peaky Blinders bonus sign.

The wild symbol consists of a simple desk with Thomas Shelby’s characteristic head and hat.

This slot machine has a relatively low minimum bet, at only 20 cents for betting on all lines. This is due to the low minimum line bet at only 1 cent. Accordingly, the maximum bet is also not the highest. The highest bet that you can place is $100 when betting 50 cents per line.

Our Peaky Blinders review found that the slot machine also has a comprehensive autoplay function, which allows you to set 10 to 100 auto spins.

The Peaky Blinders return to player rate is a relatively standard percentage coming in at 96.5%. This isn’t too bad, but also not the highest. Nevertheless, we found the hit frequency to be pretty decent. Additionally, it’s always worth remembering that RTP rates are an average established over millions of spins. Realistically, this does not speak much about the hit frequency when you’re playing over the short term.

Our Peaky Blinders review found that this game is considered a high-medium to high volatility game, with a volatility level of four out of five.

Peaky Blinders offers a win potential of up to 2,022 times your original stake should you get lucky. Assuming a maximum total bet of $100, this puts the maximum win possible at $202,200.

The Peaky Blinders base game comes with a couple of features, namely the wild symbols, as well as two interesting random features which can reward you with something extra now and again. These features can be triggered on any base game spin.

There’s only one wild symbol available on this slot machine. The symbol is a simple cutout featuring Thomas Shelby and the word wild. It substitutes for any other symbol on the reel except for the bonus and feature symbols.

Other Base Game Features

During the base game, players can randomly trigger two features, which will reward them with additional cash prizes or respins, depending on which feature is triggered.

When you unlock the Shelby Betting Shop feature, a money award will be allocated to every high-paying character symbol on the pay lines. The slot machine will then pay out the total of all pay lines and the randomly allocated money values for the character symbols.

You can unlock this bonus feature By getting a Shelby Betting Shop image on the fifth reel without any other bonus symbols on the other reels.

By Order of the Peaky Blinders Respins

When you get the ‘By Order of the Peaky Blinders’ image on the fifth reel without any bonus symbols shown elsewhere, you unlock the By Order of the Peaky Blinders feature. During this bonus feature, the game will pay for any paylines on the screen, then lock all the characters and wild symbols into place and trigger a free respin. After the respin, all the wilds and character symbols will transform into a single random character symbol. The slot then pays out all pay lines again.

There are two types of free spins in Peaky Blinders slot. In this section, we’ll have a closer look at how to trigger them and what kind of rewards to expect from each one.

When you get by order of the Peaky Blinders images on the first and third reels, with a Shelby Betting Shop image on the fifth reel, you unlock the Shelby betting shop free spins. Eight free spins are rewarded during this bonus.

By Order of the Peaky Blinders Free Spins

The music runs with standard Peaky Blinders fare, favouring the old fashioned backstreet music that the show is renowned for.

The graphics themselves also incorporate many of the downtown themes and back alley imagery that make the drama. Additionally, the images themselves are beautifully designed, and even the free spin rounds are a joy to behold.

Other slots to play if you liked Peaky Blinders

Peaky Blinders is something of a benchmark for Pragmatic Play. This is the first branded slot machine ever produced by the provider, making it one of a kind. However, Pragmatic Play is an old staple in the slot machine industry and has produced many other slots. Examples include Great Rhino Deluxe, Street Racer, and Curse of the Werewolf: Megaways.

The main appeal of this game would be for fans of the drama series to relive it on the reels. Pragmatic Play has done a fantastic job of incorporating the theme into every aspect of this slot: imagery and music right through to the free spins. What’s more, you’ve got two types of features that can be randomly triggered during the base game, and two free spins bonuses, which certainly add to the excitement. That said, the maximum win of 2,022x is on the low side when you consider the high volatility.

And now, why not give Peaky Blinders slot a try yourself at your favorite Candian Casino? Check out our Canada casino reviews to find the ideal casino, or pick one from the list above!