Gems Bonanza is the latest release by Pragmatic Play High-volatility 8×8 slot machine with payouts of up to 10,000x! Cluster… 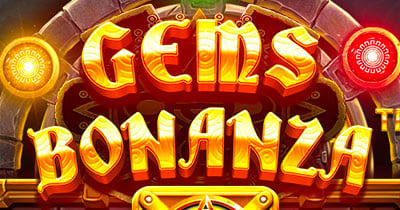 Play for free at
canadacasino.ca or

This October, Pragmatic Play came out with Gems Bonanza, a highly volatile 8×8 online slot machine with an RTP of 96,51%. Gems Bonanza boasts innovative action which will unfold in a series of cascading wins, leading to special features like super-sized symbols, lucky wilds and multipliers.

Sounds attractive? Let’s take a more in-depth look at everything this slot has to offer in our Gems Bonanza Slot Review.

Where to play Gems Bonanza from Canada!

You’ll be able to give Gems Bonanza a spin at Pragmatic Play casinos as from the 29th of October 2020. If you’d like to try it at a new casino, we can recommend any of the following operators:

Pragmatic Play opted out of traditional paylines in this online slot machine, going for the cluster system instead, which is common among grid slts.

Clusters of between 5 and 25 matching gems generate winning combinations. Plus, special marks may appear at random behind certain gems to activate various extra features that massively spice up the gameplay.

There are eight symbols in total in Gems Bonanza Slot:

Below is the Gems Bonanza paytable showing the payouts you can expect for every symbol and differently-sized clusters at a wager of £2.

This slot caters to players of all budgets with its stake range. You can invest as low as 0.20 CAD per spin. Alternatively, go up to 100 CAD to generate big wins if you hit a cluster, or stake anything in between this betting range, in increments of 20 cents.

The Gems Bonanza RTP is 96,51%, which places it slightly above the industry average. However, profits don’t occur routinely.

Pragmatic Play boosted this game’s volatility to 5/5, which means that you can expect to spin for a long time without gratification and then hit a streak of consecutive wins.

The top multiplier in the base game can grant you up to x10,000 your wager. With the broad range of available stakes, the maximum win you can get from this machine is substantial.

Pragmatic Play made sure that this slot’s gameplay is unique by adding the extra features to the mix. You’ll also see symbol modifiers as you spin.

You’ll spend most of your time on Gems Bonanza playing the base game, but its extra features make it much less repetitive than you’d expect.

The lighter green stone in gold only shows up as part of Wild Gem and Lucky Wilds modifiers. It can substitute any other symbol, creating different winning combinations depending on what else you landed.

The Tumble feature activates with each cluster win. It’s a straightforward mechanic, where the machine pays out your winnings, and the combination then disappears. The remaining symbols fall to the bottom, and new ones will drop down from the top.

Every new winning combination and bonus feature re-trigger the Tumble, which in turn fills the Gold Fever meter, bringing you closer to the progressive free spins round.

You’ll see a coloured marker behind each symbol, which activates when a winning cluster forms on top of it. Each one of these triggers a unique feature to boost your winnings:

After each of these modifiers applies, you get a new payout if another winning cluster is formed.

Gems Bonanza doesn’t have a free spins feature, but instead it comes with a rewarding progressive bonus round.

As you generate clusters, the meter on the right side fills. Once you hit 114 winning symbols, you activate the progressive spins, which goes under the name of ‘Gold Fever.’

The bonus game starts with a multiplier of 2x on all wins. You start at level one of five when each of the modifiers is guaranteed to take place in order during each level. If you manage to collect enough winning symbols, you can progress up to the next level.

Levels two to five require more winning symbols to activate, from 116 to 132. The multipliers grow to x4, x6, x8, and x10 as you progress up these levels.

Once you spin the reels and fail to gather enough symbols to progress to the next level, the bonus round ends. Otherwise, you play until you take advantage of all spin features from the fifth level.

The reels in Gems Bonanza sit against a light brown background, which seems to be a kind of map. Soothing tunes play in the background, keeping a rather minimalist feeling of this slot machine.

Pragmatic Play has paid more attention to creating exciting features than to the design and storyline behind Gems Bonanza, but the game still looks polished and eye-catching.

Other slots to play if you like Gems Bonanza Slot

If you like the innovative extra features and explosive variance levels of Gems Bonanza, you’ll also enjoy Jammin’ Jars by Push Gaming and Reactoonz 2 by Play ‘n GO.

If you’re into Pragmatic Play and want to see more of the developer’s titles, try the generous Aztec Gems Deluxe with its massive multipliers and smooth, futuristic theme.

Although the visual and sound design doesn’t bring significant novelty to the table, all the extra features in this game make it worth a shot.

If you like slots but get bored quickly, you’ll love the sheer number of options of this high-volatility machine. All that’s left now is to learn where to play Gems Bonanza and try it out yourself.