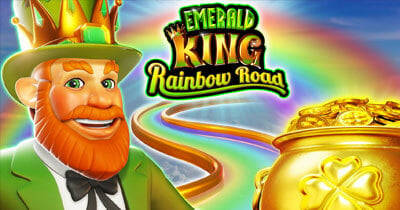 Emerald King Rainbow Road is a brand new slot release from Pragmatic Play and Reel Kingdom, and comes with a couple of innovative twists compared to the more classic Emerald King, which was released last fall.

With its colorful theme and three captivating bonus games, it’s likely to become a big hit as far as Irish-themed slots are concerned.

Travel with us down the rainbow road as we check out the slot’s features, RTP, volatility, and where to play Emerald King Rainbow Road if you’re located in Canada

You can play this new online slot as from the 18th of January 2021, at any Pragmatic Play casino that’s open to players from Canada. There are several such casinos these days, so we thought we’d list the most rewarding ones to save you some time:

As you’ve probably come to expect from five-reel slots, this game reads all symbols from left to the right. Emerald King Rainbow Road features 20 paylines, with adjustable coin values and coins per line.

This slot isn’t a wealth of symbols and only features eight in total. One of these is the wild symbol, which we’ll discuss later on.

Of the more standard symbols, the leprechaun is the highest-valued image. In an unexpected but original move Pragmatic Play has made the cherry image the most worthless.

The other symbols include a bunch of grapes, the King, Queen, Jack, and ten.

The range of values on the paytable is unexpectedly vast for such a small group of images. The leprechaun symbol is the most valuable, fetching $50 for five pictures. The cherry, on the other hand, only offers $2 for five symbols.

There’s a lot of variation between the minimum and maximum wager on this slot. The minimum stake per line is $0.01, adding up to $0.20 for all lines covered. The top line bet is $12, which comes to $240 when all lines are covered.

The maximum wager possible of $240 is relatively decent. As a minimum, $0,20 is easily affordable even for small-time gamblers.

As regular slot players have come to expect from Pragmatic Play, the Emerald King Rainbow Road RTP is favourable. At 96.71%, this slot compares well to similar games in the same category.

However, the volatility on this one is as high as they go. Accordingly, the hit rate might not be as high as you’d hope.

The hits that you land should be profitable, and you have a better likelihood of winning big in the short term. However, the chances of getting many hits in close succession are relatively low.

Not many standard slots feature massive pots like the ones in store in Emerald King Rainbow Road.

Pragmatic Play was generous with the winning potential for the Emerald King Rainbow Road slot.

Emerald King Rainbow Road isn’t one of those slots filled with features at every turn. It doesn’t have expanding reels, walking wilds, or five different bonus games.

However, there are still many attractive aspects. Thanks to the bonus games, you may find yourself on an exhilarating journey!

In keeping with the Irish theme, the wild symbol takes the form of a shamrock. The image isn’t restricted to a specific reel and can appear on any of the five.

The wild symbol can take the place of any other image, except for the scatters. It’s worth mentioning that this slot features two different scatter symbols, one resembling a leprechaun and the other a pot of gold

If you love the traditional free spin setup, then this game won’t meet your idea of free spins. This slot doesn’t feature the usual kind of free spins. However, the bonus game hosts something similar.

We’ve now mentioned them multiple times, but we’re yet to give you details about the bonus games.

You can trigger the Rainbow Road bonus game at any time by landing three or more of the leprechaun scatter symbols.

During the bonus feature, you get transported to a rainbow road that leads to massive wins. Miniature slot machines appear on the screen and spin to give you a number. The number translates to steps, and the leprechaun will move that far on the rainbow road.

Each of the 22 points on the rainbow road translates to a cash prize or a spin on the mini-slots. The mini-slots along the way can give you either further cash prizes as long as you keep lining up three 7s.

If you land a blank (collect) on the mini-slot at the bottom left of the screen, the feature ends and pays out your winnings. If you manage to land on enough mini-slots and make it to the end of the rainbow road, you can win big.

The last step on the road triggers one final slot machine that will award you with a random multiplier of between 50x and 20,000x your wager.

This is a secondary bonus feature that relies on the pot of gold scatter symbol, called the Eliminator Scatter. If you land three scatters on reels three, four, and five, the slot will activate this bonus round.

You then get to pick off the scatters to reveal the prizes behind them. The game awards the prize that’s behind the last remaining scatter at the end of the feature. The win values here differ depending on the number of scatters that triggered the feature as follows:

You can also randomly trigger the Rainbow Road feature in this bonus game.

Should all 5 reels turn green during the bonus game, you will trigger the mini slots bonus. This happens randomly, and once triggered, you will get up to 5 miniature slot machines, that will spin individually. You will keep on collecting prizes until there are no more wins on any of the slots. When the feature ends, you’ll collect all wins from the slot machines!

Emerald King has upbeat Irish background music, which makes the game a joy to play. The additional sound effects are similar and blend in nicely.

The entire game is designed in vibrant colours, featuring rainbow bands, bright colours, and gold gilding. The reel frame consists of a golden thread woven into an endless Celtic knot.

Other slots to play if you like Emerald King Rainbow Road

If you love Emerald King Rainbow Road, you can try many other games by this provider. Pragmatic Play is one of the most trusted slot developers and releases many new games every year.

If it’s the Irish theme that gets you going, consider trying Irish Charms. This charming three-reel slot revolves solely around Irish symbolism. From bright green hats to pots of gold, Irish Charms can’t help but tickle your fancy.

Our Emerald King Rainbow Road review has to conclude that this is a well-designed game that will deliver an immersive and thrilling gameplay. Pragmatic Play has done justice to the popular Irish theme, by incorporating both the familiar elements that fans of this genre love, and innovative bonus games that help the game stand out from the rest.

The RTP rate is reasonable and compares well to other slots in its class. The volatility is exceptionally high, though, so the hit frequency can be variable. However, the hits that you get tend to be significant.

All in all, this slot offers spectacular features and fantastic gameplay. If you enjoy Irish-themed slots with a high win potential, then you should definitively try this game for yourself.