Dragon Kingdom: Eyes of Fire is a three-reel, five pay line slot from Pragmatic Play. It has an industry-standard RTP… 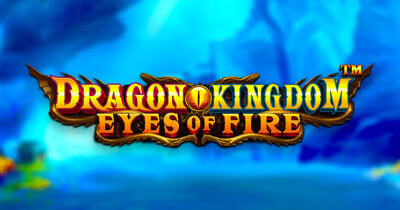 Dragon Kingdom: Eyes of Fire is a three-reel, five pay line slot from Pragmatic Play. It has an industry-standard RTP of 96.50%, and low volatility of ⅖. It features a unique progressive loss mechanic to alleviate long streaks without any hits and returns to the tried-and-true stomping grounds of the dragon’s keep for its theme.

Read on to see if this dragon’s hoard is worth trying for!

Are you ready to embark on a quest to the Dragon Kingdom in the hope of finding the Eyes of Fire!? This low volatility slot promises to keep a consistent stream of wins and you can now try it out at the best online casinos in Canada. And what’s more!? The below operators are now giving new players a generous welcome bonus!

Before we get to the symbols in the Dragon Kingdom, we must understand the game’s most unique mechanic: the progressive loss or “dead spin” multiplier reel. After every matchless spin, a counter on a cauldron at the reels’ top right will go up.

After four matchless spins, the music will swell with intensity and the cauldron will bubble, activating the multiplier reel. The multiplier reel will spin alongside your three primary reels and multiply any winnings you receive.

This reel will continue to gain higher potential multipliers the more times you lose in a row.

The reel will deactivate, and the multipliers will go back to their base values after a win. It will also deactivate if you change your bet amount in either direction. This means you can’t build up potential multipliers by only losing with low bets and then switch to a more considerable amount when you reach higher levels.

Playing the Dragon Kingdom: Eyes of Fire means resigning yourself to losing higher bets for a significant amount of time for even the chance at a high return. The progressive loss mechanic, combined with Pragmatic Play’s admittedly masterful use of soundtrack, is supposed to build tension over time with the promise of an eventually great return.

Unfortunately, the basic symbol payouts are so low that you have to get the most ideal combinations to make this function as intended, and this mechanic ends up making the slot more frustrating than exciting.

The Dragon Kingdom is a simple three-reel slot that pays only for left-to-right matches. It has five paylines in the two diagonals and three rows. The progressive loss mechanic tries to make this reel more interesting.  Read on to see how this feature works and how it affects your playstyle!

Your high-value symbols are flaming lucky 7s, icy blue dragons, and ferocious red dragons. These symbols provide only a slightly better value, ranging from 2x to 4x your bet. Boards filled with these dragons are what you eventually want to see – and we mean ‘25 losses in’ eventually. Thanks to Dragon Kingdom’s progressive loss mechanic, the last thing you want to see is a board full of these symbols popping in after just a few spins.

Wilds are mighty in this slot. Instead of just acting like any other tile to complete a chain, wilds pull double duty as extra bet multipliers. Each wild in a completed chain will serve as an additional 5x multiplier for the symbol it replaces. Wilds are crucial to getting anything close to a decent win in the Dragon Kingdom, as they are technically the highest paying symbol on the board.

With your lowest single match giving 0.4 times your bet and your highest only giving 4x, the baseboard isn’t where you’re going to find your value. Here are the payouts for each symbol and line.

The Dragon Kingdom keeps a strangely low cap on the bets in this game: the minimum is CAD 0.05, and the maximum is $25 CAD.

Dragon Kingdom lands right on the industry-standard RTP of 96.50%. It isn’t a very volatile slot at only 2/5, which is mildly upsetting considering progressive losses are something the player wants to see more often than not. Small wins are spaced out a decent amount, which keeps your overall multiplier nearing the mid-ranges most of the time.

Even the biggest chains don’t offer generous payouts unless several things fall into place at once. To reach the highest potential payout of x1250, you must first get at least 25 matchless spins in a row. Then, your first win must be a board filled with nothing but wilds and one blue dragon while also spinning the highest possible x50 multiplier on your fourth reel.

Let’s say you want to have the chance to win that x1250 prize with the highest possible bet of $25 CAD. If you even want the opportunity, you must first lose 25+ rounds, which means losing a minimum of $625 CAD. Sure, the ideal board nets you $31,250 CAD, but you’re much more likely to have your streak broken by a string of diamonds at any moment, which even with the max x50 multiplier, means you will lose $625 CAD for the privilege of only earning $250 CAD. A net loss of $375 CAD.

There are no bonus rounds to land free spins jackpots in, so hoping for long losing streaks that are eventually broken by incredible boards is your only option if you’re looking to make a profit here.

The number one word to describe Dragon Kingdom’s graphics is: acceptable. They’re serviceable for the slot and not much else. The background is uninspired, a generic water-filled cave with small piles of gold surrounding the stalagmites. It certainly doesn’t evoke the grandiose riches of a dragon’s hoard, but you also shouldn’t expect to be winning anything resembling a hoard if you’re playing this slot, so that seems to even out.

The low paying symbols are shiny gemstones in the shape of card suits – acceptable, but not spectacular. The flaming lucky 7s are the number seven but on fire. The artworks on the dragon tiles are quite nice; each dragon has a presence and personality. They look quite powerful. You can say the same for the wild tiles; the dragon’s eyes blinking before focusing on the player is a nice touch that adds a lot of atmosphere.

The soundtrack, on the other hand, is fantastic. Yes, it’s yet another high-fantasy epic score reminiscent of Lord of the Rings, but we said earlier that Pragmatic Play implemented it masterfully, and we meant it. It’s woven in with the progressive loss mechanic. The music grows in intensity and adds instruments every time the player reaches a new milestone for the fourth reel. This tension, reaching a fever pitch at 25 spins, is both incredible and welcome.

If we’re being honest, Dragon Kingdom isn’t a bad slot. It’s just dull, and at times can be frustrating. Relying on continued losses as a mechanic is always a risky venture, and we can’t say that Dragon Kingdom navigated that minefield successfully. Heartbreak should never follow good matches, and it too often does here.

That said, Dragon Kingdom does a decent job evoking its theme, and its use of sound effects and music to heighten tension is good enough to warrant a recommendation on its own. This is a good reel to bet on if you want to spend some time with dragons, but don’t expect to take their treasure home with you anytime soon.