Great Rhino Megaways is the first slot of its kind to hail from Pragmatic Play! Features cascading reels, multipliers, free… 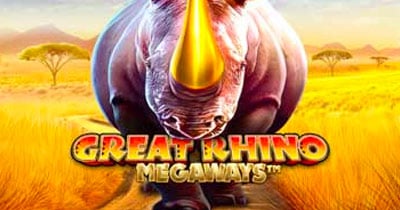 In April 2020, Pragmatic Play released its first Megaways slot after acquiring a license to use Big Time Gaming’s unique game engine. However, instead of creating a brand new concept, it essentially gave one of its previous releases a makeover.

The animal-filled slot, Great Rhino, gets an update in Great Rhino Megaways, which features cascading reels, free spins, multipliers, wilds, and scatter symbols. It also includes an ante bet feature that adds more scatters to the reels and doubles your chances of activating the free spins round. Additionally, you can buy your way into the free spins feature for 100x your bet.

Great Rhino Megaways is a high variance slot with an RTP of 96.58%. It boasts a top payout of 20,000x your stake, which is available in the lucrative free spins game. If you want to play this slot, you can find it at various online casinos in Canada for free play and real money play. In the meantime, if you want to learn the ins and outs of this game, continue reading our Great Rhino Megaways slot review below.

Pragmatic Play is a widely featured game provider, thus players from Canada can try out all of their recently released games, including Great Rhino Megaways, at a number of online casinos. To facilitate the search for a safe and rewarding casino, we have listed 3 of our most recommended casinos that accept Canadian players. So, check them out and don’t forget to claim the generous welcome bonus!

Great Rhino Megaways consists of six reels with varying numbers of symbols. The first and sixth reels can feature up to seven symbols, while reels two to five can display up to six symbols only. Furthermore, an extra horizontal row above the middle reels spins separately from the others.

To form a winning combination, you need three or more matching symbols to line up from left to right. Additionally, the first symbol must appear on the first reel. The slot also incorporates 200,704 pay ways; however, every spin produces a different amount of paylines. You can view the number of corresponding Megaways the spin created in the right corner of the screen.

Unsurprisingly, this game encompasses the same theme as the other slots in the Great Rhino series. As a result, you can expect a bright and colourful slot that depicts the captivating African savannah. The scene occurs during the day, with a vivid blue sky and various grazing animals in the background.

On the green reels, there are two kinds of symbols: regular symbols and special symbols. The regular symbols take the form of wild animals as well as themed playing cards. The more valuable symbols represent a cheetah, a flamingo, a hyena, and a crocodile, while the lower-paying symbols are 10, J, Q, K, and A.

A charging rhino acts as the wild symbol, while a gold rhino coin depicts the scatter.

If you line up five cheetah symbols, you’ll receive the highest reward of 50x your stake, while the lowest payout of 1x your bet is awarded for any five matching symbols of 10, J, or Q. Below we have included a screenshot of the paytable for your perusal with all payout details.

The betting range allows you to stake anything between CA$0.20 and CA$100 per spin. Furthermore, you can pick from various bet levels and numerous coin values in this range. If you want to benefit from the perks of playing online, you can use autoplay, which features up to 1,000 automatic spins and options to skip screens or enable quick spin and turbo spin.

Great Rhino Megaways also incorporates an ante bet feature, where you pay an extra 25% of your stake to receive a few benefits. If you choose to take advantage of this feature, you’ll receive a 25x bet multiplier instead of the usual 20x, extra scatter symbols on the reels, and double your chances of activating free spins. Additionally, one should be aware that the ante bet feature lowers the Great Rhino Megaways RTP to 96.47%.

This slot has a hit frequency of 25%, along with an RTP of 96.58%. However, if you enable the ante bet feature, the RTP goes down to 96.47%. Additionally, Great Rhino Megaways is a high variance offering that might either burn through your bankroll quickly or reward you with a massive payout.

Great Rhino Megaways boasts a top win of 20,000x your bet in the free spins feature. Here, you’ll need to select the right level of volatility and take advantage of the increasing multipliers.

The absolute maximum win is capped at 20,000x your stake. So, if you land this win before the free spins feature is over, the round will automatically end and award all of the corresponding payouts.

There are a number of features to keep you entertained in the base game, which consists of the following characteristics:

Wilds and other features

Since it is the game features that make the slot so interesting and even exciting, it is worth giving them some attention and elaborate a little further about their contribution to the fun factor of the game.

The wild symbol, represented by a charging rhino, can only land on the middle reels. Additionally, it substitutes for all other symbols, except the scatter, to form winning combinations.

Cascading reels are referred to as the tumble feature in this game, which occurs after every winning spin. As soon as the slot awards your payout, it removes all winning symbols from the grid. Then, symbols will fall into these recently vacated positions from above, giving rise to the feature’s name. If this motion produces another win, you earn the proper payout, and the tumble feature plays out again. If no further wins occur, the round ends and a spin takes place.

In this exciting feature, you can win the top prize of 20,000x your stake. Additionally, you can bypass the main game and head straight into this round at a price of 100x your current bet. However, note that you can’t purchase entry into this feature if you activate the ante bet.

To trigger free spins, you must land at least four scatters on any of the reels. Then, you need to select one of four free spins games, which offer different possibilities according to how many scatters triggered the feature. Furthermore, this feature also incorporates cascading reels that award increasing win multipliers of 1x.

As we mentioned, the available options will be different for each number of scatters. If you trigger the maximum of six scatters, your choices will be as follows:

The less scatters you land, the fewer free spins you’ll receive in your pool of options. On top of this, a higher multiplier means higher volatility in that specific round. Finally, you can win five free spins by hitting another three scatters an unlimited number of times.

The slot’s design has a strong cartoonish feel to it, incorporating many comic book style images. Overall, the graphics are slick, vibrant, and colourful, fully encapsulating the wilderness of Africa. The animations are neat and unique, with a soothing soundtrack that ties the slot together.

Other slots to play if you like Great Rhino Megaways

Here are some other excellent titles to check out if you enjoy the excitement of Megaways slots:

Pragmatic Play incorporates familiar graphics and a brand new game mechanic that offers a whopping 200,704 win ways in Great Rhino Megaways. Its most exciting feature comes in the form of a free spins game with four selections. Here, each option offers various volatility levels as well as different rewards, and it’s possible to walk away with as much as 20,000x your stake. Plus, you can gain entry into this round for 100x your wager or enable ante bet to double your odds of activating free spins. If you feel up to trying your luck on a colourful, immersive game with a high ratio of risk to reward, why not check out Great Rhino Megaways?