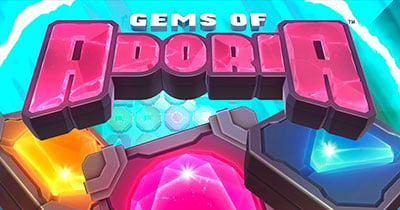 Gems of Adoria is a brand new slot game, which will be released at numerous online casinos in Canada on June 9th, 2020. The slot features dazzling gem symbols that are given a retro vibe, and a real-time 3D graphics system, which allows you to experience slots like never before!

Some of the features you’ll encounter include free spins, wild symbols, and scatter symbols, as well as flipping symbols. If this sounds interesting to you and you wish to find out more about this new game, keep reading our Gems of Adoria slot review below.

Where to play Gems of Adoria slot from Canada

If you’d like to give this game a try for real-money, then might as well do so at one of the best online casinos in Canada. There are plenty of NetEnt casinos to choose from these days, but only the best ones have made it to our list!

Gems of Adoria is a five-reel video slot with three rows and 15 fixed paylines. To create a winning combination, you need to land three or more matching symbols in order from left to right, starting from the first reel.

This slot features a somewhat mysterious background. It’s challenging to pinpoint precisely what the intention is, but it seems to fit the bejewelled grid. Eight brightly-coloured gems represent the symbols, each with a different value.

You can encounter four low-value symbols and four high-value symbols. It’s easy to recognize the latter by their distinct metallic borders. Each high paying symbol has a smaller replica as the low paying symbol. There’s a square green gem, a triangular blue gem, a circular pink gem, and a hexagonal orange gem.

In addition to these, you can also find a wild symbol in the form of a red and gold W, and a scatter symbol depicted by a glowing orb.

You can place bets as low as CAD$0.10, and up to a maximum of CAD$200 as you play Gems of Adoria slot. This is a fair betting range, offering flexibility to both casual players and seasoned punters.

This slot relies on smaller, more frequent wins to keep you engaged, resulting in low volatility along with an RTP of 96.13%. It also has a hit frequency of 22.1%.

If you’re looking for a slot with a progressive jackpot, you’re out of luck. This game offers a maximum win of 500x your stake, which you can earn in the free spins round.

There are several exciting features in Gems of Adoria that can bump up your payout, including:

Wilds and other base game features

Most of the base game features are common in slot games, so you might already be familiar with these mechanics. The exception is the flipping symbol feature, which is unique and offers big payouts.

The wild symbol takes on the form of a red and white W. Its job is to substitute for any of the symbols, except for the scatter, to produce a win.

These wilds can strike at any moment. When the feature triggers, up to 9 striking wilds can randomly land on the reels, giving you the chance to win big payouts.

This is probably the most entertaining feature in the game. When it randomly activates, two to five consecutive symbols flip vertically or horizontally, resulting in a more significant win than you previously earned.

To trigger free spins, three or more scatters need to appear on the reels. As a reminder, a glowing orb represents this symbol. Three scatter symbols bag you ten free spins, four can get you 20 free spins, while five earns you 50 free spins.

During this feature, you can trigger flipping symbols as well as striking wilds, which can net you up to 500x your bet.

The most impressive feature of this slot is its graphics, which are designed in 3D and take you closer to the reels than ever before. This allows you to have a memorable and unique gaming experience, which is something we’re all after, right?

As you already know, the highlight of Gems of Adoria is its innovative 3D graphic system that moves around the grid, offering different viewpoints and angles. It’s simple, yet very modern-looking at the same time. Accompanying these visuals is a perfectly matched soundtrack that matches the chunky symbols.

Other slots to play if you enjoy Gems of Adoria

A three-dimensional gaming experience is a lot of fun, and numerous slots incorporate this mechanic. Here are some game featuring 3D graphics that you can take for a spin:

It’s safe to say that Gems of Adoria is different, but not to the point that it risks alienating players. It’s a simple slot that incorporates standard features like free spins and wilds, along with its exciting flipping symbols feature that rewards you with better payouts. The low volatility will appeal to players looking for a more relaxed gaming session that offers smaller wins more often.

The star of the show is the real-time 3D graphics system that features for the first time in this title. It’s unique and intriguing, and there’s no doubt that NetEnt will use this effect again in the future. Gems of Adoria offers a relaxing atmosphere where you can have a fun gaming experience, all while appreciating those cutting-edge graphics.